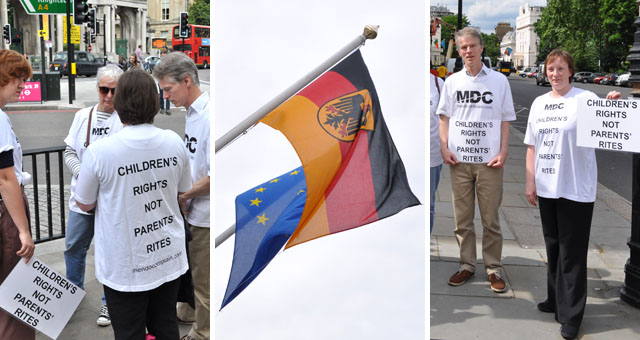 On the 21st of July Men Do Complain took the following letter to the German Embassy in Belgrave Square, London.

We represent the voices that you may not have heard concerning the ruling of the Cologne Court which decided that religious male circumcision “violated the child’s rights” and caused “bodily harm”.

We ask that you support the Cologne ruling [11] and resist calls for it to be overturned or sidestepped. We applaud the courage of the court in making this judgment and are delighted to see that other countries such as Denmark, Norway, the Netherlands and possibly Ireland, are looking to follow Germany’s example.

The U.K. High Court when asked to give permission for a child to be circumcised for religious reasons decided that the child’s right to choose his or her own religion, when competent to do so, outweighs the parents’ rights to manifest their religion.

The point was clarified by Mr. Justice Munby when considering the point under the European Convention of Human Rights in his judgment in the case of “S”:

“….however much respect one pays to religion or to any particular religion, and whatever the religion and the nature of the religious beliefs in issue in the particular case, a parental view based on religious belief, however profound, can never be determinative when it comes to considering what is to be done in relation to a child. After all, although Article 9 of the Convention guarantees “the right to freedom of thought, conscience and religion”, the right to “manifest” one’s religion, whether in worship, teaching, practice or observance, is subject to such limitations, prescribed by law, as are “necessary in a democratic society … for the protection of the rights and freedoms of others.” The mother’s rights under Article 9, in other words, are qualified by S’s rights…”
( [2005] EWHC 1490 (Fam) 11th July 2005 )

That male circumcision causes harm is beyond doubt. Unrebutted peer reviewed studies have shown that the male foreskin is an essential component of a complete sex life for both men and women.

Please listen to our voice and keep in mind this quote:

“Parents may be free to become martyrs themselves. But it does not follow that they are free in identical circumstances to make martyrs of their children before they have reached the age of full and legal discretion when they can make choices for themselves.”
(Rutledge J in the United States Supreme Court in Prince v Massachusetts (1944) 321 US 158 at p 170: )

The Cologne Court has given confidence to the children harmed by the practice of forced male circumcision who are now men, to raise their voices without fear of ridicule about a subject which has been ignored for far too long. Please do not be afraid to offer protection to children who cannot resist the irreversible actions of adults.
Yours etc.

Thank you
Men Do Complain is deeply grateful to all those who came to show their support for the Cologne ruling and to promote the right of all children to grow up free of any genital modification without an absolute medical imperative. 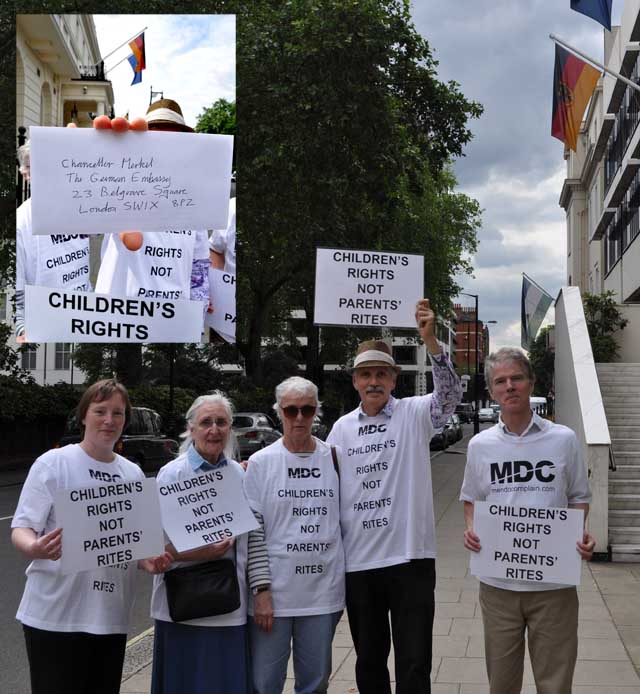