Vernon Quaintance has been charged with sex crimes according to the South London Press. For more information on this alleged pervert and his connections do visit the CircLeaks site. 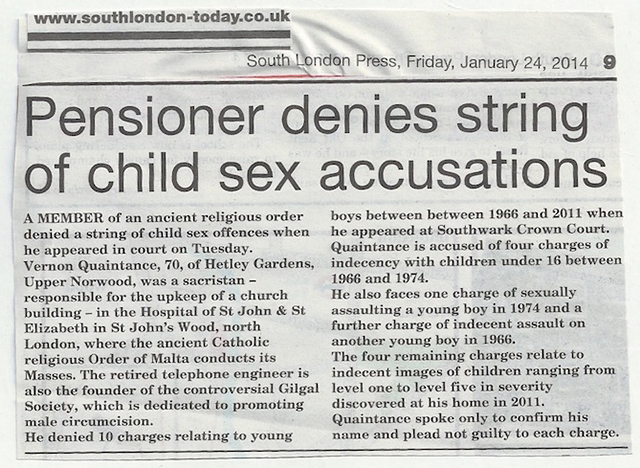 Men Do Complain is supported by women and we are grateful to all who see that children’s rights to autonomy and freedom of religion should be equal for all regardless of gender, race or parental beliefs.

Iris Fudge one of MDC’s female supporters has attended many of our demonstrations; in the picture on the left she is at our “Happy anniversary” protest in August 2011.

Iris is consistently polite, forceful and informative in her interactions with the public.

Iris is interviewed by James Loewen. Click on the photo to watch the interview.

Some enlightened people have been pointing out for a long time that circumcising children is a tragic mistake. The current wave of protest goes back several decades. More and more men are coming forward and protesting at what was done to them as children, when they could not make an informed choice about circumcision. The stigma attached to complaining about having been circumcised is diminishing thanks to some brave individuals, their courage and intelligence has ensured that men who do complain are now being taken seriously.

On the 15th of March 1986 Marilyn Milos founded the National Organization of Circumcision Information and Resource Centers. NOCIRC rapidly became a respected source of information on the subject of circumcision.

When Marilyn, working as a nurse, first saw and heard a circumcision she was horrified and asked the doctor if it was really necessary; she was told it wasn’t. Marilyn then started informing parents considering having their sons circumcised, of what she had seen and that the operation was not medically necessary. The hospital authorities reacted swiftly and Marilyn lost her job. Twenty five years on and Marilyn is still very active in the fight to end all medically unnecessary cutting of children’s genitals.

There are a great many people that have stood up for the rights of children in the matter of circumcision but one person has just had an anniversary that should be marked.

On December the 17th 1970 Van Lewis protested outside the Tallahassee Memorial Hospital in the U.S. that circumcision was a sex crime.

Van and his brother, who was taking pictures, were of course arrested. The police fogged the film in the camera so this photocopy from a newspaper is all that documents the events of December 1970.

Van Lewis may well be this movement’s Rosa Parks. In December 1955 Rosa Parks was the African American woman who when challenged by a bus driver to give up her seat for a white passenger, refused to move and became a catalyst for the Civil Rights movement in the U.S.

In the rush to promote circumcision as a preventative measure to control the AIDS epidemic it should not be forgotten that children are not sexually active and can therefore derive no immediate benefit from being circumcised. Circumcision can wait until the individual concerned can make an informed choice based on the evidence. So get active and stand up for the rights of children. 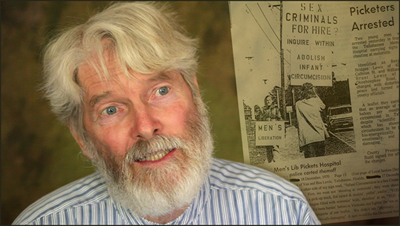 Van Lewis tells the story of his arrest and describes his own personal journey in this excellent fifteen minute interview. 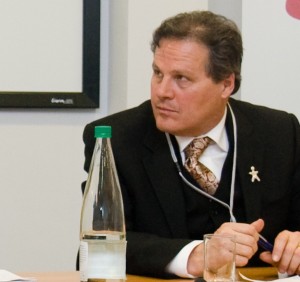 I am very sorry to hear that Paul Mason has been replaced as Children’s Commissioner for Tasmania. Paul took a very enlightened view of the cutting of children’s genitals. I am sure Paul will continue to work towards an age when all children can grow up to make a fully informed choice about the form and function of their genitals. This blog wishes Paul the very best for the future, thank you Paul.

It was with great sadness that I learned of the death of John Taylor. John’s work exploded the myth that the foreskin in the human male was just spare skin, his work showed that the foreskin is a specialised and vital part of male sexual anatomy. The following is a quote from John’s obituary.

“…John spent 27 years at the Health Sciences Centre as a forensic pathologist, teacher and researcher and was an Associate Professor of Pathology at the University of Manitoba. His heart research, which included a special interest in the development of the human heart from embryo to adult, was published in the Canadian Journal of Cardiology. However, the research that gave John international recognition was the work he did to support a growing opposition to routine infant circumcision. His publication in the British Journal of Urology was a courageous and creative effort to secure the genital integrity of infant boys born today and in the future…”