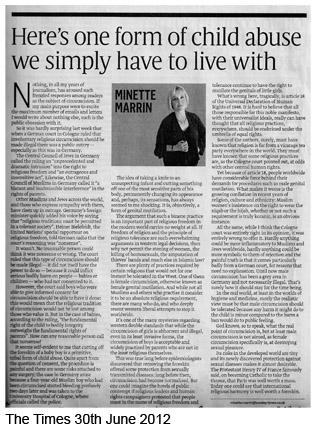 In Germany the Court in Cologne issued a ruling [11] which stated that the religious circumcision of a boy “violated his rights” and caused “bodily harm.” Subsequently a flurry of articles have appeared in the press with the aim of preserving the status quo, namely that non-therapeutic male circumcision should be seen as a benign procedure.

The truth is very different, the evidence from the physical sciences is overwhelming, circumcision is a significant body modification.

Psychological evidence is limited and research is underfunded, we simply have no idea of the harm that might be being caused.

Demographers have found evidence of psycho-sexual dysfunction [12] in adult men that is associated with circumcision. The two letters that follow have not been published by the Sunday Times. They are included here because of their passion and reason.

From Dr John Warren
Minette Marrin tells her readers ‘Here’s one form of child abuse we simply have to live with’, referring to non-therapeutic circumcision of male children, and she is wrong.   My own body was mutilated by this abuse 70 years ago and it was 50 years before I dared to face ridicule and raise my lone voice against it.   By now I have been joined by more and more protesters, men and women, from all cultural and religious backgrounds, and we shall never be silent.   Our protests will only grow until this form of child abuse is ended in this realm.   I may not live to see it, but I can assure Ms Marrin that there will come a time when medical students will ask their professor of ethics in astonishment:  ‘Did doctors really do that to healthy babies in Britain in the 21st century?’

From Laura MacDonald
Dear Sir,
A few weeks ago you printed a story of a dentist’s offer to excise the clitoral hood of a Muslim girl, arousing nationwide outrage on her behalf. This weekend, Minette Marrin jauntily offers up the nerve-rich hoods of thousands of small defenceless boys as a trade for what she calls ‘religious harmony’.

Is it any wonder we can’t tackle FGM in any of its forms in this country when we suffer such bizarre doublethink?

A girl’s small foreskin is deemed so precious that we offer a sentence of up to 14 years in jail if someone takes it from her; a boy’s larger and more functional one is apparently so expendable it can be traded by someone he has never met, in return for her peace of mind.

Facts are also apparently expendable to Marrin. Far from having ‘tiny’ risks in the developed world, male infant circumcision is associated with life threatening harm: in Birmingham, where cultural circumcision is undertaken by the NHS, 11 boys were treated in paediatric intensive care with life threatening haemorrhage or infection in 2011 (in one hospital alone). In Oldham, the PCT has provided under Freedom of Information a report showing 9 babies suffered circumcision haemorrhage and shock over a period of five years – one bled to death. Evidence of long term urinary problems is also growing, with many Muslim and Jewish boys suffering a painful surgical procedure to open a urethra closed by scar tissue. And this is even without talking of surgical slips, of extreme pain and of the psychosexual feelings around loss of a mobile primary erogenous zone.

I expected better of the Sunday Times than this, and better of Marrin. Firstly, this debate should be based on facts not myths. Secondly, one doesn’t make trades with other people’s assets, least of all children’s private parts.

Thanks
Men Do Complain is deeply grateful to all those who speak for the children who cannot protect themselves from the inappropriate activities of adults.