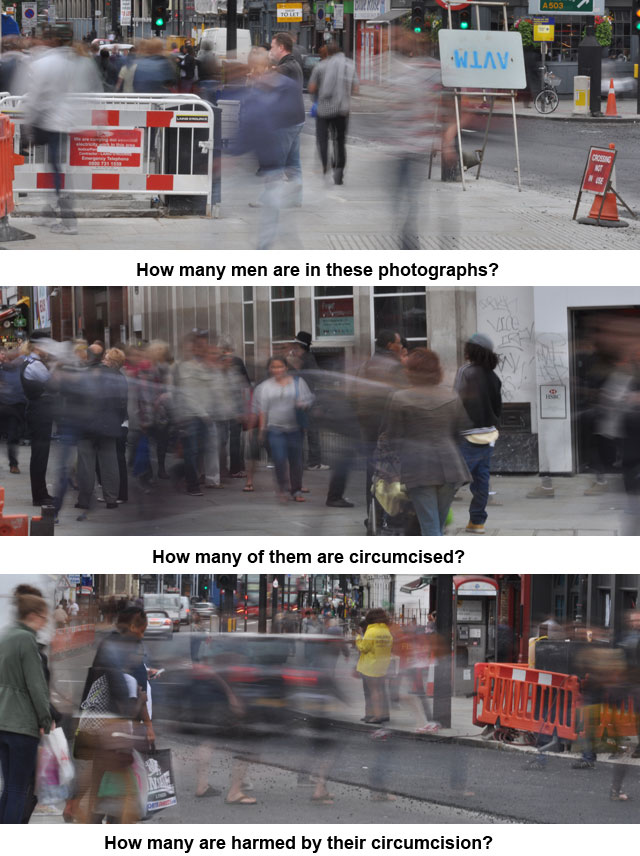 Three questions that are apparently difficult to answer. Very careful study might answer the first question. Research over time will answer the other two questions. Few circumcisions are recorded in medical notes and very few men are followed up into adult life, to see how or if circumcision has affected them.

Physical harm
That circumcision is physically damaging is now beyond doubt. Embryology shows us that the same tissue that becomes the foreskin in males develops into the clitoris in females. The anatomical work of Taylor, Lockwood and Taylor tells us that the foreskin is composed of highly specialised cells with neurological and immunological functions. The work of Sorrells and his team demonstrates that circumcision removes the parts of the penis that are most sensitive to fine touch pressure. So circumcision is only beneficial when it treats a specific and relatively severe problem.

No benefits to children
There is not a single medical association in the world that recommends the routine circumcision of children since there is no benefit to children. A child’s foreskin is physiologically phimotic, not retractable, it should be cleaned like a finger, rinsed on the outside and left alone to develop and separate from the glans naturally. When the young man has gone through puberty he may, rarely, be left with a phimotic, non retractable, foreskin but this can almost invariably be treated conservatively, without circumcision. Education and safe sex in later life will provide more than adequate protection from any of the other problems circumcision is claimed to prevent.

Psychological harm
The silence of men is mistaken for satisfaction. This site and others are collecting data that is likely to reveal that men are psychologically harmed by non-therapeutic circumcision.
One example of the psychological damage unnecessary circumcision can cause is alexithymia; a disorder where people have difficulty identifying and expressing their emotions [13]. Those affected become less able to empathize with others. Sufferers of severe alexithymia are so removed from their feelings that they view themselves as being robots. If acquired at an early age, such as from infant circumcision, alexithymia might limit access to language and impede the socialization process that begins early in life.

Cosmetic outcome
A paper titled “The long term outcome of severe hypospadias“[5] may seem unrelated but this paper is about the surgical repair of an abnormality seen at birth when the tube that should close to convey urine along the penis does not close completely leaving an opening on the underside of the shaft of the penis, through which urine can pass. The repair of the abnormality if it is severe often involves the use of the foreskin as replacement tissue. This long term follow up study asked the men for their views on the cosmetic outcome of the surgery and got the following response.

“Of those who consider their penile appearance to be ‘abnormal’, this is owing to the absence of foreskin in four cases”

The total number of men whose foreskins were used to effect the repair was 27, a small sample size, fortunately hypospadias is a rare condition,  4 men out of 27 works out at 14.8%. Fifteen percent of all the men who have been circumcised and therefore have had their foreskins removed may well feel that the appearance of their penis is “abnormal”. The resulting calculation works out as a very big number that represents a lot of men unhappy with the cosmetic outcome, never mind any other problems.

Follow up
So if a long term follow up approach was used on the male population who have been subjected to non-therapeutic excision of their foreskins what would be the results?  Sadly this work has never been done. Perhaps no one wants to know the answer.