Whilst attending the Genital Autonomy Symposium in Boulder, Colorado which spanned the three day period July 24-26, Richard, Logan and Patrick took the opportunity to support US intactivists by participating in some street protests that were being staged in nearby Denver both before and after the symposium. The location (which had been announced in advance on Facebook) was a busy intersection overlooking the Colorado State Capitol. Logan and Patrick surprised the organiser Brother K when they appeared unannounced on the morning of Wednesday 23rd and were warmly welcomed. Brother K later commented on Facebook: “This was his (Patrick’s) first visit to the United States, a surprise he kept from me, so that when he walked up and joined the Bloodstained Men & Their Friends protest in Denver, I just about fell over in astonishment.” 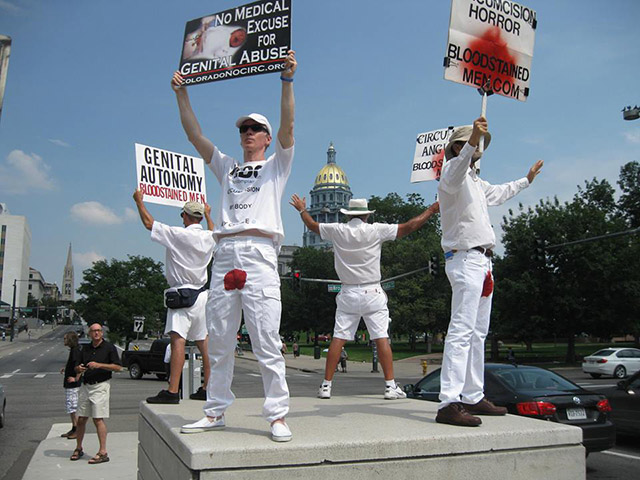 There was already a group of more than half a dozen gathered there, including Jonathan Friedman, Harry Guiremand, Franny Max, David Hill, David Atkinson, Arlis Quick Feidt, Felicia Jones and Patrick Brown. It was a hot day and the group were located in an exposed position, but thoughtfully the organisers had laid on a plentiful supply of bottled water to counter the effects of dehydration.

A performance of the routine that Brother K has made his trademark then followed, whereby a procession of intactivists would march onto the pedestrian crossing when the red light halted the traffic and spreadeagle themselves side by side with placards raised above their heads. Just before the lights changed to green they would all retreat again to the sidewalk. The performance was photographed and the pics posted on Facebook by several of the participants and members of the public.

A generally positive response was received from motorists and pedestrians who engaged with the demonstrators. A good supply of professionally produced educational handouts highlighting some headline facts and figures about male genital cutting in the USA was prepared for the occasion, and distributed. 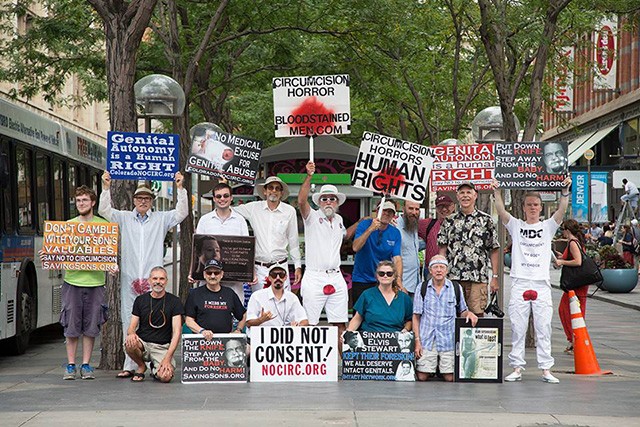 The day after the symposium Patrick returned to Denver to join Brother K and others for another session of street theatre. This time it was decided to split up into two groups: one remained at the intersection near the Capitol building, whilst the other group positioned themselves half way down the 16th Street Mall. Patrick accompanied Brother K, Jonathan Friedman, Harry Guiremand and James Snyder to the Mall where there were mercifully plenty of trees which provided some welcome shade. They were also joined by Jonathon Conte and Hugh Young. Jonathan Friedman decided to up the ante by boldly chanting some provocative one liners to attract even more attention. The others soon joined in to form a chorus.

The last of the Denver protests was staged on Monday 28th when upwards of 20 intactivists converged on the Mall, Denver. It was the most impressive public display of support for the cause that the UK contingent had ever been involved in.  Brother K was particularly pleased to protest with Richard in his bloody overalls, since it was Richard who played a big part in launching the concept several years ago. The overalls have since become a regular feature of many street protests in the US and the UK. James Loewen was in attendance, as he so often is for major intactivist events, and shot photos and videos of the proceedings, which will in due course be available for viewing on his Bonobo3d YouTube channel.

Thanks to Patrick for this report.