An interview with a General Practitioner from the Midlands giving his views on circumcision as it is practiced in 21st century Britain.

At a conference in Frankfurt this May the phrase “fair weather child protectors” was used by Christian Bahls of MOGiS in his presentation to the conference. What he meant was that there are organisations that claim to protect children but when the abuse strays into controversial territory then the organisation concerned turns a blind eye to the abuse. The National Society for the Prevention of Cruelty to Children (NSPCC) is just such an organisation.
When the video, a frame of which is shown below, was posted on Facebook the NSPCC demanded the removal of the video. The video shows a crying baby being held by the arms and repeatedly dunked into a bowl of water and the NSPCC quite rightly regarded this as a cruel practice. 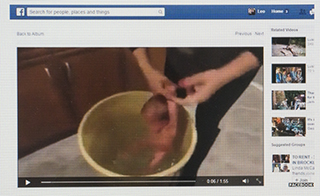 There is no doubt that the cutting of any child’s genitals without an immediate medical imperative is a cruel and anachronistic practice and MDC hopes that the NSPCC will review it’s current position on the cutting of children’s genitals and will come to a gender neutral position and protect all children whether they be intersex, girls or boys.

Should anyone wish to see a video of a boy’s genitals being cut there are several available at circumstitions.com. Just the descriptions of the video content available on the site is scary enough, you have been warned.

Please take the time to read up on these guidelines and use this link to post your comment to the CDC. This is a link to the published guidelines from the CDC.

Critiques of the CDC guidelines can be found here by Brian Earp and here from Intact America. It is important that we respond and add as many unique comments in response to these guidelines as many countries use the American medical establishment’s stance on cutting the genitals of boys as a justification for the continuation of this anachronistic practice. 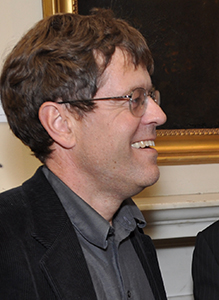 Attorneys for the Rights of the Child – ARC – issued a press release today, December 3rd 2014, in response to the December 2nd release from the  for Centers for Disease Control and Prevention – CDC – of a draft of proposed circumcision guidelines.  The press release can be accessed at PRWeb. The text of the release is reproduced below.

Steven Svoboda Attorneys for the Rights of the Child Pictured left has started what must become a flood of responses to the CDC’s draft guidelines. Intact America are going to organise a quick link to allow supporters to post comments. As soon as we have more on this we will make it available.

Attorneys for the Rights of the Child Preparing Response to Today’s Draft Circumcision Regulations Released by the Centers for Disease Control and Prevention (CDC); CDC Ignoring Medical Evidence and Growing International Opposition

Berkeley, CA – The human rights organization Attorneys for the Rights of the Child (ARC) (www.arclaw.org) is preparing a response to the Centers for Disease Control and Prevention (CDC) regarding its release on December 2, 2014 of a draft of proposed circumcision guidelines.

J. Steven Svoboda, ARC’s Executive Director, commented today, “Sadly, the CDC has chosen to ignore the medical evidence to try to justify an outmoded and painful cultural—not medical—practice. In these days of constantly mounting medical costs and ever scarcer resources, we simply cannot afford to continue supporting and performing a harmful and antiquated procedure.”

Regarding the CDC’s claim that circumcision’s benefits outweigh the risks, Svoboda commented, “The CDC omitted the functions of the amputated tissue. If the CDC advocates for cutting off a body part, shouldn’t we know what that body part does?”

Svoboda commented, “If circumcision is as desirable as the CDC suggests, why are European countries moving towards banning it, why are their males healthier than Americans, and why does the CDC not come out and recommend it?”  By the CDC’s own admission, Americans are increasingly choosing to leave their sons intact, as circumcision rates have plunged in recent years.

Svoboda added, “A recent study (Bossio, Int’l Society for Sexual Medicine 2014) concluded that the literature favoring circumcision contains considerable gaps, lacks rigor and is largely not applicable to North America.” Studies of HIV in adult males in Africa suffer from methodological and statistical errors and even if valid, given vast differences in health conditions and modes of transmission, the results can hardly be applied to justify infant male circumcision in the United States.  “Doctors cannot ethically remove tissue from babies without consent, based on speculation about their possible sexual behavior decades later,” Svoboda added.

Attorneys for the Rights of the Child is a non-profit organization founded in 1997 to protect children from unnecessary medical procedures to which they do not consent.

Thank you to all our supporters who have donned the bloodstained overalls to campaign against the cutting of children’s genitals. The message is getting out there. Intact America has made the Bloodstained Men “Intactivist of the Month”. 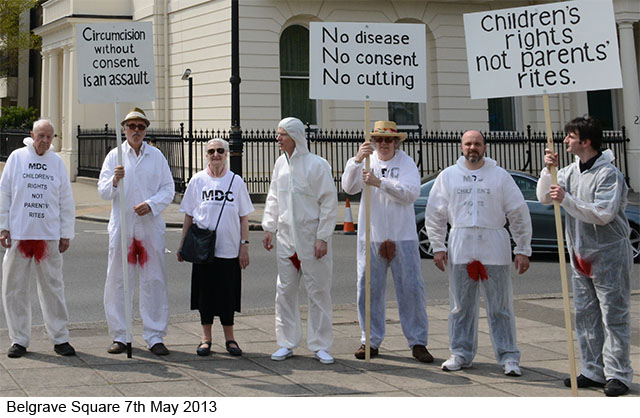 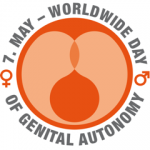 Please join us on our protests this year the first of which will be on the 7th of May for “Worldwide day of Genital Autonomy“. The place will be central London times and exact location are to be decided.
There will also be events in Germany and around the world.